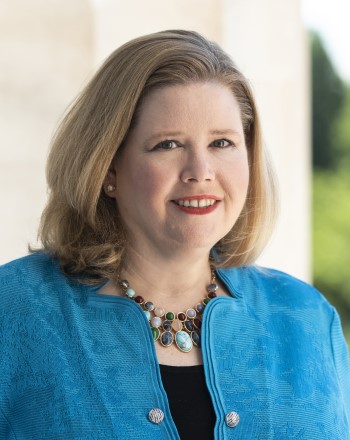 Emily W. Murphy is a senior fellow in the School of Business at George Mason University. Murphy's direct appointment is with the Center for Government Contracting.

Murphy served as the GSA Administrator from 2017 to 2021, leading a workforce of more than 11,000 federal employees, and overseeing 371 million square feet of office space and $75 billion in annual contracts. As Administrator, she increased GSA’s sales by 36%, from $55 billion to $75 billion, increased revenues by $8.2 billion, and saved customer agencies $21.6 billion. Under her leadership, GSA had the highest customer, vendor, and employee satisfaction scores in the history of the agency.

Prior to being confirmed as Administrator, Murphy served as the Senior Advisor at GSA and oversaw the merger of the Federal Acquisition Service and the Technology Transformation. During the administration of President George W. Bush, she was appointed as GSA’s first Chief Acquisition Officer from 2005 to 2007. In that role, she was responsible for more than $40 billion in acquisition programs. She also served at the U.S. Small Business Administration from 2004 to 2005 as the Senior Advisor for Government Contracting and Business Development, and as Acting Associate Administrator for Government Contracting.

In addition to her seven years of senior roles in the Executive Branch, Murphy spent nine years serving in various procurement policy and leadership roles for the House of Representatives. She served as Counsel and Professional Staff Member to the Committee on Armed Services, negotiating acquisition and industrial base provisions in military public policy. She also held Senior Counsel and Policy Director roles for the Committee on Small Business from 2011-2016, where she directed the legislative and oversight agenda of the Committee and authored over a hundred contracting reform provisions that ultimately became law. Emily previously worked for the Committee from 1997-2000, focusing on government contracts matters, disaster loan policy, and telecommunications issues.

In the private sector, Murphy was the General Counsel and Vice President for Operations for TerreStar National Services Inc., a wholly owned subsidiary of TerreStar Networks, which operated integrated satellite and terrestrial telecommunications systems. She also practiced government contracts law with Wiley LLC as an associate from 2001 to 2003.

Murphy is a graduate of the University of Virginia School of Law and Smith College. She is a member of the Young Presidents Organization, the Economic Club of Washington DC, and the Chief Executives Organization.